New Atheism is not unlike the old, except its members tolerate religion less and ridicule it more. The Four Horsemen: Richard Dawkins, Sam Harris, Daniel Dennett, and the late Christopher Hitchens popularized the movement. These new atheists are quite clever. They strategically shift their position between strong and weak atheism, depending on the venue. Weak, implicit, or negative atheism emphasizes a lack of evidence for God’s existence rather than positively asserting nonexistence. Strong, explicit, or positive atheism requires good reason to make the claim God does not exist. I use the words “good reason” as a placeholder for that which justifies one’s belief.[i] In this post, I argue an element of shiftiness exists in the new atheist movement. But first, let’s look at the difference between strong and weak atheism. The following diagram should clarify the two positions: 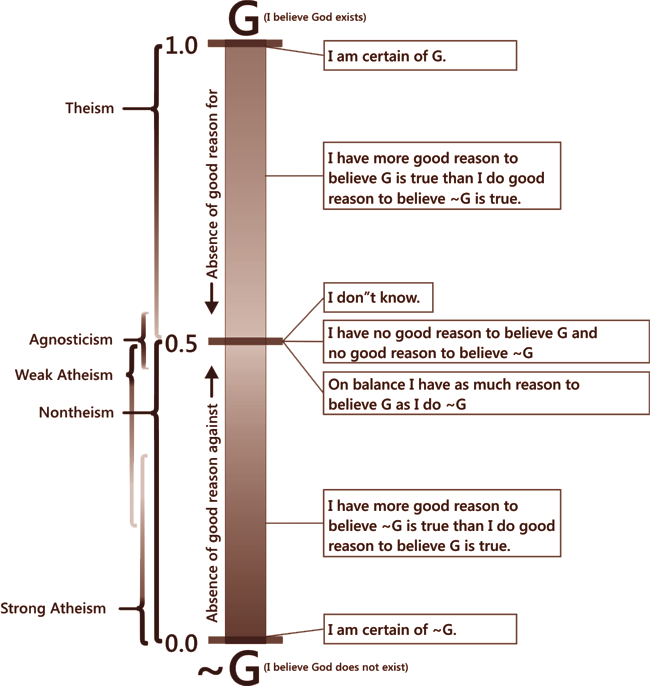 The expressions on the right of the diagram provide examples of where one approximately falls in the belief-spectrum. On the left side of the bar are numbers (from 0 to 1) showing the epistemic probability for the proposition, “I believe God exists (G).” On the far left of the diagram, you will note a few popular positions. At this point, you may be wondering: What is epistemic probability?

Epistemic probability (EP) provides a means to measure one’s confidence in the truth-value of a proposition. A value of 1 indicates certainty in a propositional-truth (say P). Absolute assurance in ~P (that is ‘not-P’ or the negation of P) is represented by 0. In the middle at 0.5 is equal confidence, or lack thereof, in that P and in that ~P. We might refer to this middle region as agnosticism; a word derived from the Greek a-gnosis meaning without knowledge. And I’m not talking about background knowledge (though that may be lacking too.) I am referring to one’s understanding of the truth-value of that P. Finally; EP is not to be confused with statistical probability.

On the one side, it [probability] is statistical, concerning itself with stochastic laws of chance processes. On the other side, it is epistemological, dedicated to assessing reasonable degrees of belief in propositions quite devoid of statistical background. Hacking (1975).

EP comes in at least two flavors: subjective and logical. The first is primarily based on one’s personal inductive standards and can lead to epistemological relativism. One may feel entirely sure about a matter, but their position may be merely subjective if it lacks an independent measure to ground it. The latter version of EP takes a more objective approach. Something independent of the knower provides warrant or “good reason” for their position. Now you may be wondering: What does this have to do with new-atheism?

A duplicitous pattern exists in the new atheism movement where adherents display strong atheism based on a subjective EP in most areas of discourse. But when it comes time to rationally defend their position, they are compelled to retreat to agnosticism based on a logical EP.

In the April 2009 debate between Christopher Hitchens and William Lane Craig an exchange took place where Craig asked whether Hitchens’ position was one of strong atheism or agnosticism. Hitchens replied: “Once I’ve said I’ve never seen any persuasive evidence for the existence of something…I will go as far to say, have the nerve to say, that He therefore does not exist.” When Craig then asked for arguments for the nonexistence of God, Hitchens continues: “I find all of the arguments in favor fallacious and unconvincing.” Hitchens’ attempt to evade the question is rechallenged by Craig, but to no avail. Hitchens simply refuses to provide an argument. Craig finally asks him if he agrees “the absence of evidence is not evidence of absence” to which Hitchens replies, “I can’t say that I do.” [ii] This was one of the few candid exchanges I’ve witnessed by a prominent new atheist on this subject. In the absence of evidence for atheism, rationality pulls Hitchens relentlessly towards agnosticism. Yet Hitchens remained incorrigible and asserts a robust subjective atheism throughout the debate.

Hitchens is not alone. Recently Dawkins spoke at a debate at Oxford University with the Archbishop of Canterbury.The chairperson said to Dawkins “…you, Richard, believe you have a disproof of God’s existence” to which Dawkins emphatically responds “You were wrong when you said that.” Dawkins goes on to say that in the God Delusion he rates himself a six out of seven where seven is absolute certainty God does not exist. This would be equivalent to a 0.14 EP. Here Dawkins is suggesting that if he had a disproof he’d be a seven, but without it, he is just a six. The chairperson then proposes to Dawkins that he ought to call himself an agnostic, which is odd given someone claiming an EP of 0.14. Yet Dawkins astonishingly replies “I do!” When the chairperson seems unsatisfied with anything less than perfect certainty for such a prominent atheist, Dawkins half-jokingly relents “okay, I’m a 6.9.” Now that’s a firm atheist position with an EP of 0.014. Quite frankly, I’m not even that certain of what I had for breakfast this morning! But then Dawkins says something extraordinary I think cuts to the chase:

“When you talk about agnosticism it’s very important to make a distinction between ‘I don’t know whether x is true or not’ therefore it is 50-50 likely or unlikely…and that’s the kind of agnostic in which I’m definitely not. I think one can place estimates of probability on these things and I think the probability of any supernatural creator existing is very very low.”

Yes, very, very low indeed with his brazen claim of strong atheism at 0.014. On the one hand Dawkins says emphatically he is an agnostic when asked about a disproof, but then he quickly distinguishes himself from a “50-50” agnostic. But here’s the problem with Dawkins thinking – he misconstrues EP with statistical probability. An agnostic does not hold there is a “50-50” chance God exists; he doesn’t know if God exists. The following thought experiment should help to clarify where Dawkins went wrong:

I tell you I have a box full of cards with either heads or tails depicted on them and ask you to draw one at random. But just before drawing a card, I invite you to assess your confidence as a epistemic probability (EP) in the belief: “You will draw heads.” Of course, you have no idea. You do not believe you will draw “heads” any more than “tails.” I might have put all “heads” in the box or few. The heads-tails distribution is unknown to you. The correct EP is 0.5 because you have no justification for moving up or down without additional information. However, this does not mean as you draw cards from the box; the number of “heads” drawn will approach 50%. The objective (statistical) probability in drawing “heads” is unknown and not necessarily 0.5 just because you are entirely unsure and your SP is 0.5.

So why would Dawkins try to obfuscate and redefine agnosticism? Why was Hitchens so reluctant to be labeled an agnostic? The answer is obvious. You cannot legitimately speak, rally, write, argue and debate relentlessly about one of the most profound subjects if you simply don’t know. You cannot have integrity and be bent on the destruction of theism if you don’t know. You certainly cannot be one of the four horsemen of atheism if you don’t know. What recourse do they have other than to weasel out? Agnosticism, adequately understood, is not a category any prominent new atheist is comfortable with.

But if sound arguments are available for atheism, if good reasons can be shown, then the new atheists ought to articulate them. Hitchens should have presented his arguments at his debate with Craig. Dawkins should have presented evidence for atheism to the chairperson at Oxford. But as mere agnostics, perhaps new atheists should take down their signs and close up their shops in the marketplace of ideas. If they do not know, they simply have no business competing with those who claim to know.