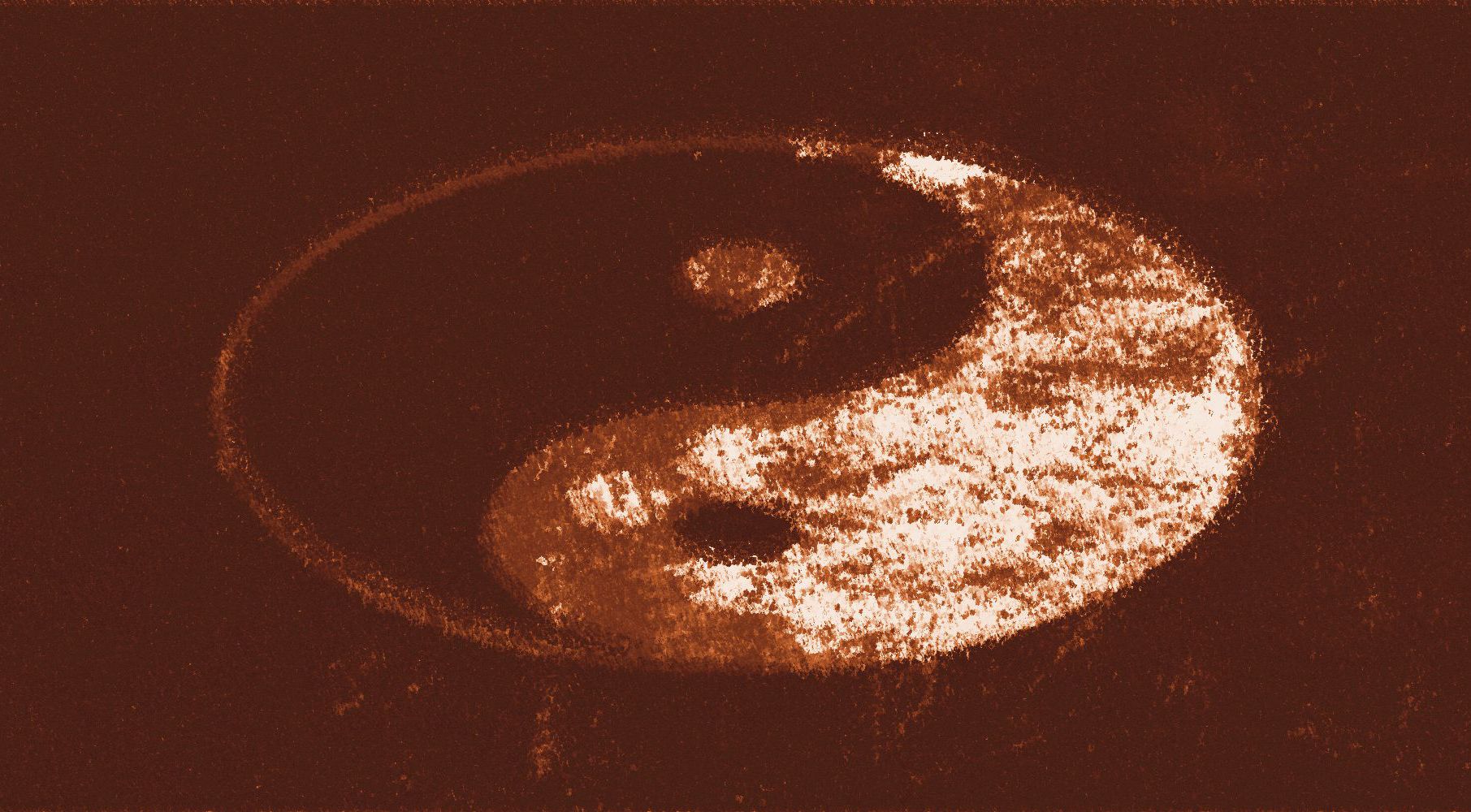 Thirty-five years ago in Taiwan, I researched and developed for seven weeks a cable television product. A few friendships formed where we spent evenings playing cards and table tennis. I remember my friend Hashi, who relied on crutches due to a childhood bout with polio, showing me a copy of the book, Tao Te Ching. Written in Chinese, I did not understand any of it. But I did recognize the yin and yang symbol on the cover. As a typical impertinent twenty-something, I let out a chuckle at what I deemed silly superstition. My friend was offended, especially since I had not read it. Even though I still generally reject eastern metaphysics, I now appreciate how opposing yet complementary features of the world interlace at a harmonious center. This intriguing aspect of reality deserves a closer look.

I’m not so much speaking of moderation, where there is a quantitative balance. For example, if you do not have enough food, you starve; too much, and you become overweight and unhealthy. Nor am I talking about something like evil, which is not the opposite but the absence of good. Instead, I am interested in the world’s aspects of polar opposition where creativity, thriving, and goodness are found somewhere in the middle, often balanced on a razor’s edge. This dualistic harmony shows up in more places than you might think.

There is a precise balance between order and chaos in the physical world. As the late John Polkinghorne put it: “Modern science has come to recognize that the processes that can give rise to genuine novelty have to be at the edge of chaos where order and disorder, chance and necessity, creatively interlace. Otherwise, things are either too rigid for anything new to happen or too haphazard for novelty to persist.” If uniformity and the restrictive forces of physical necessity were more dominant, a crystallized universe of static simplicity would exist — a world of stone. If the nonlinear dynamic processes of change dominated, everything novel and worth preserving would quickly vanish into chaos — a world of vapor. But because reality is precisely balanced, conscious observers in a beautifully complex universe obtain and endure.

Genetic algorithms solve NP-hard puzzles in my software engineering field, such as The Traveling Salesman Problem (TSP). If you have to visit twelve accounts for the day and need to know the shortest driving path, a computer could work every possibility. But that’s over a trillion tests! It’s far too process-intensive to solve by brute force. Instead, we treat a random series of stops as a string of RNA in software. A genetic algorithm takes the sequence and creates offspring with mutation. The offspring most fit for survival to the next generation are the ones with the shortest overall path. This approach works surprisingly well. But what does this have to do with dualistic harmony? Well, what is interesting is if you raise the degree of order (persistence) or the degree of chaos (mutation) from an optimal level, no suitable answer obtains. Novel and better offspring (shorter paths) never develop if the dominance of order is too great. Improvements to offspring are lost in subsequent generations if chaos dominates. Like this software solution, the creative forces of life itself exist on a similar edge.

Take the finely tuned balance between the repulsive and attractive forces of the physical universe. The gravity from matter is constantly pulling the universe together while explosive (dark) energy is pushing it apart. Today, nothing would exist if the early universe’s density departed even slightly from a razor’s edge. Known as the flatness problem, a variation in one part in 10^62 would have been catastrophic to our existence. Such a small ratio is difficult to visualize. But to put it into perspective: If the number of grains of sand on the Earth represented the perfect balance, shaving or adding one atom to a single grain would be enough to throw things off and prevent our existence.

What about something closer to home? Take psychology. As Daniel Seigel points out in his work: “Emotional well-being is considered a balance of systems that integrate with each other, and mental illness can be defined as a shift from a state of integration either to a rigid extreme or to a chaotic extreme. This deviation from mental balance frequently occurs in mentally healthy persons, but extreme deviations can result in clinical conditions.” A mind that is too chaotic, too active, too easily diverted is unhealthy. Overly-focused mental faculties, rigid and obsessive, are not healthy either. There are overly free spirits, and there are control freaks. We may be gullible and too opened-minded or cynical and excessively skeptical. There are many areas of psychology where dualistic harmony appears.

As Christians, we see this kind of duality in even something as mundane as pleasure and pain. Even though the poles provide a means of thriving, there is an apparent reason why God has the healthy man living at the center of these oppositions. If our purpose for existence is to love God and our neighbor, then it is only possible to fulfill this purpose by living between the poles. On the extremes, pleasure leads to addiction, and pain leads to despair. Both addiction and despondency draw our focus inward. So while pain and pleasure have their proper function, the center’s space allows us to be others-focused, a requirement to fulfill our purpose.

But perhaps the most remarkable theological example of dualistic harmony is found in divine revelation. I have often wondered about the hiddenness of God, the poles of revealing versus obscuring. In my apologetic interactions, this problem has come up more than once. Why doesn’t God make himself more evident if He wants a relationship with His creatures? Why not just put “Made by God” on every strand of DNA, showing us the Author instead of pointing us to blind material processes? There are at least two reasons, I think. First, we sense how shifting the balance towards painfully obvious diminishes God. I put it poetically like this:

A thunderous call and blinding flash,
Where crushing glory sinks the sky,
Has man recoil, and in terror, lash,
From the intrusion of ear and eye
By less than the One who sits on high.

We instinctively know the god of Monty Python, the bearded man parting the clouds and yelling down at creation, is hardly a god worthy of worship. But more importantly, love and faith both require a degree of separation. If these qualities are what God desires of His creation, then we should expect to find ourselves in a world on the edge of revelation and vagueness. Too much obscurity, and we have no chance of knowing the Creator. Too much revelation leaves us smothered, resentful, and faithless. Perhaps, as the mathematician Blaise Pascal aptly put it, the balance is just right: “There is enough light for those who only desire to see, and enough obscurity for those who have a contrary disposition.”

In conclusion, the world consists of opposing yet complementary features in multiple domains where flourishing exists somewhere in the center. Much of the dualistic harmony we see in the world is not the fortuitous outcome of blind processes settling and converging at some equilibrium. Instead, purpose, telos, infuses a universe where there is an end in mind. In the case of psychology or biology, there may be corrective forces in play to bring about homeostasis. But in many other areas, the razor’s edge is simply a brute fact. Though we contrive various materialistic theories in response to these brute facts, it sure seems to me that something deeper is at work.