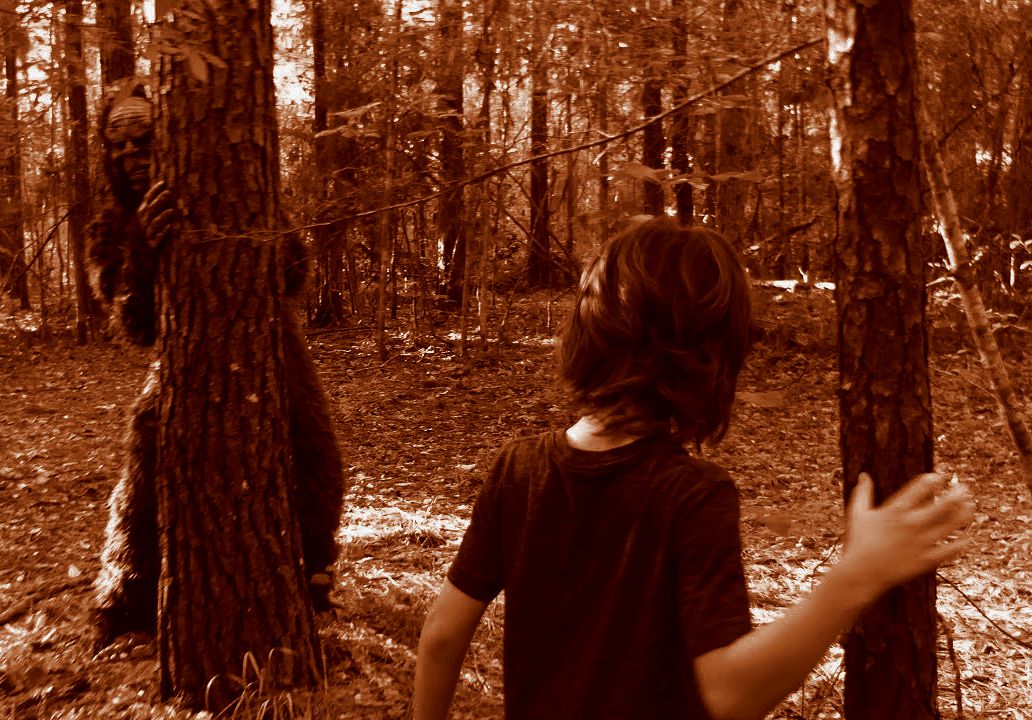 It was in the Fall of 1980 when Danny and I devised the Bigfoot project. We participated in many pranks before and after, but this was our magnum opus. It was elaborate, hilarious, and required a team effort. We were inspired in our endeavor by the perfect prankee. His character sowed the seeds of an idea that grew so big, it towered above all other pranks.

Our target was a self-proclaimed Mohawk named Ernie Converse. He lived off Highway 41 in a rundown cinderblock house. Ernie’s entire family was huge, both in stature and weight. He had a younger brother and sister. His mom was imposing, and we avoided her at all costs. Ernie was nasty, crude, and our nemesis. It was not uncommon for him to follow up threats on the school bus with action once we were dropped off. His lineage often played into the intimidation. He was the superior fighter, with superior senses–or so we were told. We used his attitude of superiority to our advantage.

The execution took place in the woods behind Danny’s house. His family owned roughly ten low and swampy acres in central Florida. It was full of poison ivy and insects. There was a small pond, a sinkhole actually, with a trail around it. It was generally a miserable place, save for the giant fort built by Danny’s older brothers. This fort was impressive, with two beds, a window, a door, a couch, and a tin roof. The entire structure was built on pilings about five feet above the ground. We were tough kids, most of whom were accustomed to no air conditioning. How we spent entire summers in that fort, though, is now a bit of a mystery.

In the beginning, the plan was modest, almost dull. The two of us made a trail of giant footprints. It started a few hundred feet from the fort and went all the way out to the pond. The spacing between each impression was about six feet, each one crafted by a technique most of us learn as kids. You plant your heel and swipe your foot left and right. Then slide the heel forward a bit and swipe a larger arc to finish off a convincing size-24 footprint. After Danny and I spent a couple of hours doing this, we reached out to Ernie.

I have no idea what went on over at the Converse house. It was not uncommon to find the whole family just sitting around outside. Late that afternoon, we approached Ernie, keeping at least twenty feet between us. He was only a threat if he could grab you, and we were wiry little sprinters. “We think there is a bigfoot in the woods.”, said Danny. Ernie replied with a dubious, “uh-huh, sure.” “Seriously Ernie, we need your skills to figure this out.”, I told him. This got his attention, and after some back and forth, he reluctantly agreed to take a look.

It was now late afternoon, and Ernie seemed somewhat agreeable as we trekked out into the woods. I suppose he could have been lulling us into a false sense of security, but we stood pretty close as we came upon the trail of footprints. “You guys did this.”, said Ernie. We assured Ernie these were recently discovered, and we had no idea what they were. He still didn’t buy it. So I threw out a proposal we had purposed all along. “Ernie, I have an idea. Let’s camp out here at the fort on Saturday and track the bigfoot down.” After some negotiation and betting, Ernie agreed. We now had five days to prepare, and needed help. We recruited my brother Matt and another friend Kevin. The four of us would put in a herculean effort to get ready for Saturday.

The first step involved some technology. We are talking about 1980, so it was nothing impressive by today’s standards. We ran speaker wire out to a hole about fifty yards from the fort. We buried a waterproof power-horn speaker in the ground and placed a screen over the top. Leaves camouflaged the setup. The cable went up inside the fort to an amplifier. The input went to a phono-plug in a pillow on one of the cots. This is where we would hide my cassette tape recorder. But we needed to record bigfoot sounds.

A little ingenuity delivered a deep howl and stomping sound-effect. If you pressed play and record, that put my tape-player in normal record-mode. But if you also partially depressed the fast-forward button, it would record with the tape moving much faster. This made playback of the recorded sound slower and much lower in pitch. We sat on Danny’s kitchen floor, banging pots and pans and yelling into the microphone while recording in fast-forward. The result at normal playback was downright scary. Each bang of the pot sounded like a giant foot stomp, and the yelling, a deep moaning howl.

We needed a lair. It wasn’t enough to have footprints suddenly end in the woods without a destination. Bigfoots need hang-outs, and we found the perfect one. We turned an old rotted-out water oak into the bigfoot lair. Danny and I used an ax to carve out a doorway in the hollow tree. We put scratch marks all over the trunk, starting at around eight feet up using a garden rake. We pulled the brush back about ten feet in all directions, leaving dirt grounds. Clearly, something big frequented this lair.

The team got together on Friday and used ropes to uproot some smaller water oaks along the footprint path. A massive wild beast doesn’t just use trees for a handhold. He pushes them down out of his way. We placed scratch marks high up in unclimbable trees. We went back over the footprints and made them look more authentic. We put a handmade club at the lair. This bigfoot knew how to make primitive tools. But the pièce de résistance came later that afternoon.

Danny had disappeared from the team for a few hours and showed up excited. “Hey guys, you gotta check this out.” He led us out to the lair. Everyone was totally aghast when they saw what laid inside the doorway. It was a large dead dog! Danny had dragged this stinking carcass on a burlap sack almost a half-mile from Highway 41 to the lair. “Where did you find a dead dog?” we asked. But then we quickly realized these were, in fact, pretty common. What’s not typical is dragging the decomposing remains way out into the woods.

The dead dog was it. We knew then Ernie would be convinced. We spread some fur outside the doorway. This dog didn’t go down without a fight. After a round of laughter and expressions of disgust, we headed back to the fort. Once there, we fashioned a large limb above the tin roof that could be dropped from loosening a knot inside. This grand finale was to be executed only at the direst point. After a system-check, we were ready for Saturday night.

It was a little chilly, and we had started a fire by the fort. Someone, I won’t mention, peed on the hot coals leaving a stench-cloud permeating our immediate area. This was timed just before Ernie’s arrival. “What stinks?” said Ernie. We didn’t know, of course, suggesting it had been like that all week. After shrugging it off, we hung around the fort for a while. Kevin had brought a 24-pack of Chek cola, an everyday trailer park staple. After a soda, we headed out, slowly.

We all carried flashlights. It was now well after dark. In my pocket, I had a mini-cassette recorder, where I taped the entire episode. We started at the same spot from five days ago and followed the footprints as they led us deeper into the woods. The first alteration from our previous expedition was a downed tree. I asked Ernie, “What can your Mohawk skills tell us; how long ago did this happen?” Ernie responded like a girl, his voice a whole octave up, “I’d say about 30, or 45 minutes ago.” It had actually been down for 30 hours, but we acted impressed and shocked.

Ernie was still somewhat dubious at this point. Even though the uprooted tree unsettled him, it was the scratch marks high up in trees with no lower branches that started to strip him of doubt. He kept shining his flashlight up into the trees, starring. I could see he was getting progressively uncomfortable. It was everything we could do to keep a straight face and press on knowing what was coming. We finally made our away around the pond and approached the lair. We let Ernie take the lead. As the beam of his flashlight landed on the dog carcass, it only took a couple of seconds for Ernie to say: “Let’s go back.”

I was on the verge of bursting out in laughter, so I decided to act scared and run from the scene at full-speed. That way, I could cover up my expression. My partners followed suit, and quickly Ernie was lagging behind. He never cried out, “wait, wait!” But I have to believe he wanted to. When we got back to the fort, the fire was out. We stumbled quickly in and closed the door behind us. Ernie was out of breath and visibly shaken. “You guys couldn’t have done that, right?” We all acted like it was the wrong time to get accusatory when a giant beast was potentially nearby in the woods. We didn’t even honor his question with a response.

I made my way over to the bed and got comfortable near the hidden play switch. I pressed play and interrupted the conversation: “You guys hear that?” Everyone was silent. Off in the distance, you could just barely make out a moan with intermittent stomping. I slowly raised the volume to simulate an approach. Ernie was downright terrified now. Speaking once again at a higher octave, he asked for a Chek cola. “For a dollar.”, was Kevin’s response. Even at a 1000% markup, Ernie said he was good for it. As he popped the soda, Danny dropped the branch on the tin roof. A massive bang reverberated inside the fort. Ernie yelled.

At this point, holding back laughter hurt. But everyone held it together. Ernie didn’t know what to do. He was, in every way, petrified. The tape played out, and then there was nothing but silence. We sat there in the dark and in that silence for a good hour. Finally, Ernie got the courage to suggest we all leave together. We did just that and went our separate ways. My only regret is that we eventually told Ernie he was pranked. At first, he didn’t believe us. But we finally prevailed. Convinced, he was left furious, so much so that he vowed to get back, violently, at each of us. How he attempted to do so is another story.